Apparently, I have been added to some sort of flash interview spot on the Festspiele website. Enjoy!
View the video spot here.
Posted by Quinn at 9:55 AM No comments: 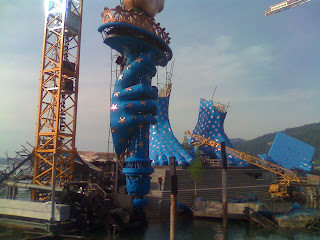 This particular posting will be one of many as the summer progresses.
First entry is from Monday evening, after arriving in Bregenz after almost 9 hours of flying and another 90 minutes of driving from Zurich to Bregenz.
- - -
Lots of traveling yesterday.

Lots of traffic on I-94 coming back to Chicago from Milwaukee.  I had a funny feeling in my gut that the traffic would be there when my manager and I had originally begun planning the whole day.  I’d been misled the first few times I traveled to and from Milwaukee.  The traffic was very minimal.  I arrived on Monday morning in Milwaukee for the start of rehearsals merely an hour & fifteen minutes from the start of my journey in Chicago.  And when I hopped in the car to drive back on Friday night and take advantage of the day off between shows to do some packing and run last minute errands at home, the traffic again proved not a problem at all.

Sunday was a different story altogether.  What had taken not even an hour and a half took almost TWO hours.  Marjorie joined me that morning to see the show.  She’d made plans to have a friend of ours check up on our two Dachshunds for the day as she would be back home by the early evening after dropping me at the airport.

We hit traffic a FEW times.  BOTH ways.  I knew we were in for unfortunate driving.  We started out smoothly, all the way out of Chicago on I-94.  All the way up through Skokie and Highland Park, traffic flowed evenly.  It was after we’d passed thru the first toll booth that things began to look discouraging.  Brake lights.  That was Marjorie, seeing cars’ brake lights far up ahead.  “Uh oh, honey.  Brake lights.”  And then, “Don’t you do it.  STOP BRAKING!!”  The trusty look-out.

What it came down to, I guess, was that there were just too many people on the road that day.  It WAS Sunday, after all.  I feel like I’ve lived in Illinois long enough to know that folks DO tend to drive outta town on the weekends, and return on Sunday afternoon/evening.  Too many people.  Not enough of them paying attention to traffic.  Speeding up too fast.  Then there are those who sit on the inside lane going too slowly.  Or those who drive too slowly in ANY lane for that matter.  Too many who act like they’re all alone on the road.  No one but them, so they’ll just drive as fast or as slow or as badly as they want.

And it was the same coming back to Chicago.  Too many people.  Not enough of them paying attention.  A bunch who didn’t care.  I had a lady in a Jeep Cherokee, riding my rear bumper for a while.  Why do you have to drive so close?  If I have to brake suddenly, you’ll eat my rear bumper for dinner!  And I WAS rushing back, straight to the airport to make my flight to London.  As if I didn’t have ENOUGH stress on me already!

The hardest part was having to jump outta the car, leaving Marjorie behind, a quick kiss and a hug, and rushing to the British Airways counter at O’Hare’s international terminal to see if I was going to be able to make my flight.  I’d had Marjorie find the 800 number for the airline to call ahead and see if I’d be able to get on the plane depending upon when I made it to the airport.  The nice girl on the phone told Marjorie something to the effect that they’d accept passenger check-in at the counter up until 40 minutes before the flight.  There was a part of me that didn’t want to make it in time.  A part of me that wanted to get there, have the counter tell me I was too late, book me on a flight a few hours later, I’d’ve checked my bags, and then we’d’ve driven back home to relax for a couple hours.  The other thing was, they couldn’t totally guarantee my bags making it thru to Zurich with me.  THAT would have been a mess.  I wasn’t ending my travel in Zurich.  I was going to be driven from Zurich, over the border to Austria.  Who KNOWS what would have happened had my bags not made it.  I doubt the airline would have sent my bags all the way out to Bregenz; over the border into another country.

But the hardest part was having to leave Marjorie behind so hastily.  No time to sit and talk.  No time to lean in and share each other’s touch.  No time to do all those mushy little affectations that couples do.  No goofy little baby voices, or meowing and purring as we like to do.  Our Dachshunds make some of the BEST gestures and facial expressions.  We incorporate those bits of communication as well.  It’s just what we do.  But there was no time for ANY of that.  I rushed into the building with my luggage.  She drove away and pulled off somewhere to wait for me to let her know whether or not I’d made it on the flight.  I had.  I called her to let her know, and that was it.  That was goodbye for the summer.  Yeah…not a good way to leave.

Milwaukee Symphony Mahler 8 proved to be quite an enjoyable experience.  This production marked Maestro Andreas Delfs’ finale with the Milwaukee Symphony after which he would be stepping down as Music Director.  One could feel the familiar tugging of heart strings to see and hear the ardent response from those on and off the stage as Delfs took the podium.  It was all too apparent that he had made a lasting impression on the music community of Milwaukee as well as those who enjoyed the fruits of its labors.  And as the maestro brought the finale to a triumphant close at the end of both performances, all in the audience almost immediately rose to their feet, applauding fiercely.  I, for one, enjoyed the tickling sensation of victory washing over me in a calming wash of energy.

I enjoyed sharing the soloist duties with my fellow colleagues.  Each solo voice possessed a character and line that they inhabited fully.  When one reaches a specific level of professionalism, one cannot deny the feeling of accomplishment and excellence that comes with it.  To listen to each voice was to hear a technician work their craft as only one of sufficient stage experience could produce.

The adult and youth choirs offered a comfortable cushion for which both the soloists and the orchestra were able to build on to round out the wonderful, full sound that is required of this of Mahler’s great works.  When all the elements of the entire ensemble are engaged, the result is staggering.  I always wonder how individuals could conceive all that sound…all those different voices and instrumental parts all working as a unit.  Such gifted individuals as Mahler could NOT have possibly been human, for the works they have bestowed on the world surpass mortal abilities, in my humble opinion.