I hadn't sung MESSIAH in eight years!!
It was nice to get to do MESSIAH again. And the Nashville Symphony and Maestro Giancarlo Guerrero put on such a great show! I was more than happy to be a part of it! Sharing the production with soloists Terri Richter, Brian Asawa, and Bryan Griffin was a treat. And I had a great first visit to Nashville! Bought myself a big, bad, black cowboy hat.
This is also the first time I've done all the solos in the whole piece. Except the "But Who May Abide...Refiner's Fire" movement. This is, on occasion, given to the alto/countertenor. I was okay giving it up. Nashville was my first opportunity to sing "The Trumpet Shall Sound" for an audience, so that more than made up for it. I'm hoping I can get more Messiahs. I missing singing the piece.
Merry Christmas All!!!!
Posted by Quinn at 6:46 PM No comments:

Sorry for being so behind. It's now Christmas time. Christmas Eve, to be exact. And the Fall has come and gone. I've been bad. Sorry. Bad Quinn.
So...San Francisco Opera.
I had a great Fall in San Francisco. Great people. Great friends. Great company. I've been so thankful to have had the company bring me back the last two seasons, after making my last-minute debut in the Fall of 2008. To me, it's just one of those companies that treat their artists very well, and so everybody WANTS to go back and work there. And then the productions are all the better because of it.
Madama Butterfly came first, as far as my assignments were concerned. The production was Chicago's, from my first season at Lyric Opera. The whole thing consisted of a giant turn table with Butterfly's house on it. And as the opera progressed, the house would spin as different sides of the set were used for the different scenes. Very classy. Very poignant. And it's ALWAYS nice to be able to come back to a familiar production again. I enjoyed my cast. Sometimes the rehearsal period can seem to drag on and on when you're working, but Butterfly seemed to move along at a nice clip, and before you knew it, we were onstage and into dress rehearsals.
I enjoyed three quarters of the run, and then I had to back out so that I could begin rehearsals for my second show of the season.
Aida was nice to come back to. After enjoying a second consecutive summer of it at the Bregenz Festival in Austria, it really seemed like cake walk. Being so familiar with the opera helped, too, being that our cast had only five days to put everything together before our two dress rehearsals and then the re-opening. Again, great cast. Got to work with a great colleague and friend of mine, Christian Van Horn, who is enjoying a healthy international career after establishing himself strongly in Munich and elsewhere in Europe. He and I were in both Butterfly AND Aida. SF Opera was privileged to have his talent there, as were the rest of us onstage! I was just happy to sing with my friend. It surely makes going to work easier when you get to see familiar faces on the stage with you.
There were so many GREAT great friends at the Opera: in the Rehearsal Department, in Wigs and Make-up, in the Chorus, and even in the audience on certain nights. SF Opera has done so well, whether they know it or now, in nurturing such a cozy work environment. It really makes all the difference.
And in the end, it's always hard to leave. Partly because of all the time that had been spent in that wonderful town. Lots of good times.
Posted by Quinn at 5:55 AM No comments: 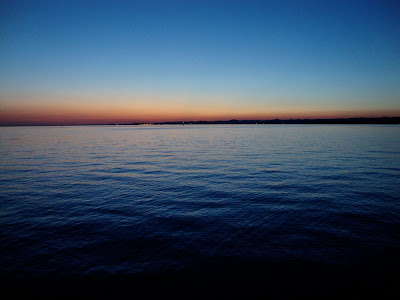 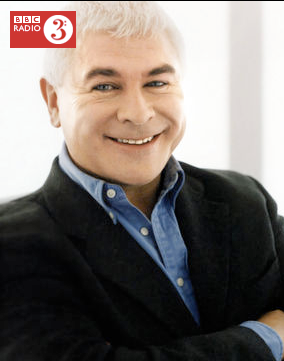 http://www.bbc.co.uk/iplayer/episode/b00sgyvb/In_Tune_Thursday_Sean_Rafferty/
So here's the link. It's a two hour program. Fast forward to about 9:53 where our actual interview begins. The program plays a recording of the tenor/baritone duet (not our production) at the beginning of our section. The interview ends at about 26:22. From then on, there's another recording of a Pearl Fishers in French of the finale of the entire opera. Hope you enjoy.
Posted by Quinn at 5:22 PM No comments:

These last couple months have been fun in New York. Always nice to come back to the Big Apple for good work. And City Opera's Butterfly was definitely that.
Gigs are always fun to look forward to. Each job will always be different, no matter if you go back to a company you know. Debuts are always special. First time at a new place. New faces. In the case of Butterfly, it was nice to know I'd get to work with friends. Always takes the edge off when you actually KNOW somebody on your first day at school.
I'd always heard all kinds of talk about City Opera. No, the fees aren't as plentiful as other companies. Yeah...the acoustics had a reputation for being less-than-adequate. And now with new management, who KNEW how things would go. I wasn't about to make any assumptions. Wouldn't have done me any good.
And d'you know...I think we might have a decent company on our hands, folks. Good people working behind the scenes, both offstage in the wings as well as in the offices and various workshops. Good people working onstage. Solid musicians, this production had. Just an overall positive vibe going on that you don't always get. Throughout the progression of rehearsals and music, there was a definite uplifting sort of attitude that made one look forward to going in to work...even on those days when one would have awoken to gray, drippy weather out and had wished to pull up the covers and sleep in with warm puppies under the covers, then spend the later bits of morning clad in sweats, clicking away at a game controller, in heated battle over the internet with like-minded buddies.
There was a professionalism that actually helped the day pass by quicker. Rehearsals would end earlier because everyone was on the same wavelength, it seemed, and so the well-oiled machine performed (no pun intended) with a smooth efficiency that yielded shorter work days and happy bosses. And then Happy almost always infected more and more people to where opening night arrived like glistening shore break on a black pebbly beach. So crisp. So fresh. But with power behind it, too.
I can't wait to come back!
Posted by Quinn at 6:56 PM No comments: 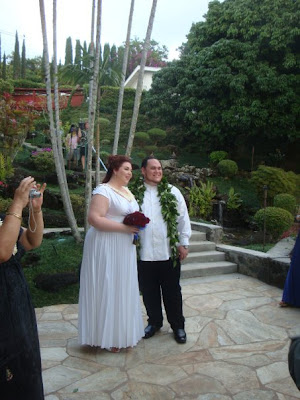 That's right, folks. After a busy few weeks, I've finally returned here to let everyone know that Marjorie and I were happily married in Honolulu, Hawaii on January 9th, 2010. We had a beautiful ceremony at Central Union Church at 3pm. We had a nice group of family and friends in attendance. It was so nice to see such a big group of Marjorie's family in Honolulu for the wedding...not that they WOULDN'T have come, but nice because it was quite a trip for all of them!
Here's a small peek at our wedding day. I seriously doubt it will ever be topped!
Posted by Quinn at 9:41 PM No comments: